Have a break and join us on our blog as we discuss the world of travel, exploration, culture, and of course….SpeakShake! SpeakShake’s very own Fanny Vallantin, was recently invited to participate as a member of the judging panel at a five-day programme hosted by the non-profit organisation, ThinkYoung, at Coca-Cola’s Paris headquarter, during the 27th November and 1st December.

ThinkYoung, founded by Andréa Gérosa, aims to actively involve young people in decision-making through its Entrepreneurship School programme, which has, for the last three years, been supported by the Coca-Cola Foundation. During these five days in Paris, over 100 participants were organised into groups to work together, propose their best start-up idea and pitch their business model to the judging panel, which consisted of Andrea Gerosa (the founder of ThinkYoung), Clarisse Fageolles, (the CSR officer at Coca-Cola), David Lorrain (the founder of Recyclivre) and Fanny Vallantin (the founder of SpeakShake).

Read on to find out which group blew the judges away and took home the Entrepreneurship School 2017 prize.

November 2017 – An article has been written on SpeakShake by Franc-Parler, an organisation for French teachers worldwide, in association with FIPF and the OIF. You can read it here. November 2017 – SpeakShake are proud to announce our latest partnership with Cité Innternationale Universitaire in Paris! Read their article about SpeakShake.

If you’re a Cité U student, sign up via the Cité U portal today on http://www.speakshake.com to get free access to our platform. November 2017– SpeakShake participated in a the first ever Culture and Tourism Hackathon held by the Culture Minister of France and was awarded 2nd prize!

The three-day event, held between the 20 and 22 November, was organised to encourage young entrepreneurs and developers to address the challenges of modernisation and innovation faced today by the culture and tourism industry.

SpeakShake entered the hackathon and answered with a prototype platform called « Tour Is Me », a network for enabling locals to connect with tourists to help them plan their trip in advance with useful advice and tips, a concept based on the original functionality of the SpeakShake platform.

November 2017 – SpeakShake were present at this year’s 3-day Web Summit event in Lisbon, exhibiting in the Beta section under the Business France and French Tech umbrella. 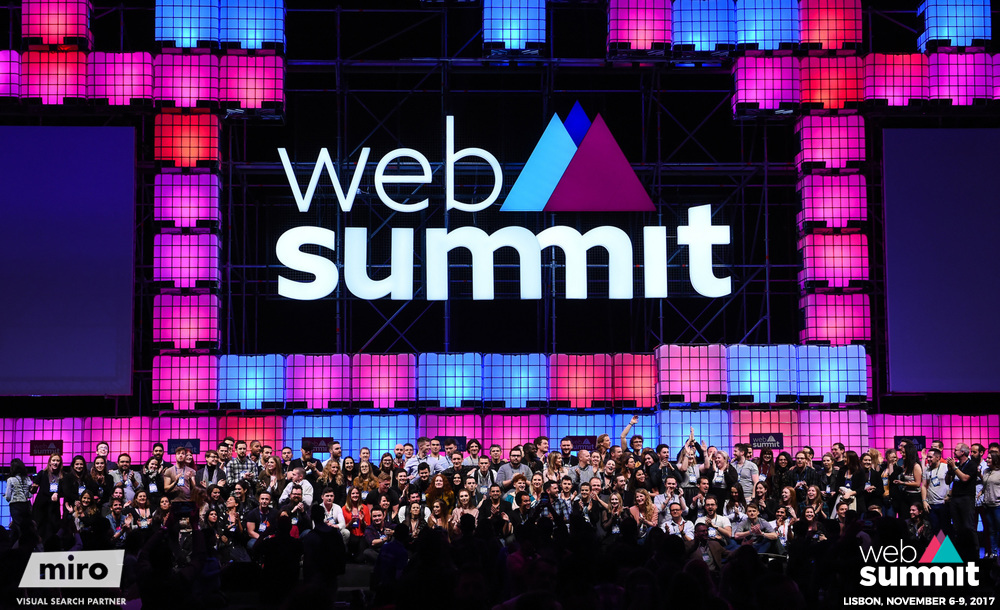 Web Summit is one of the largest, if not THE largest, technology conferences in the world, and this year saw over 60,000 attendees from 170 countries, 1,200 speakers and more than 2,600 journalists. It was an excellent opportunity for SpeakShake to spread word about its platform and latest mobile application release, and to also present it’s B2B model for Business Organisations. 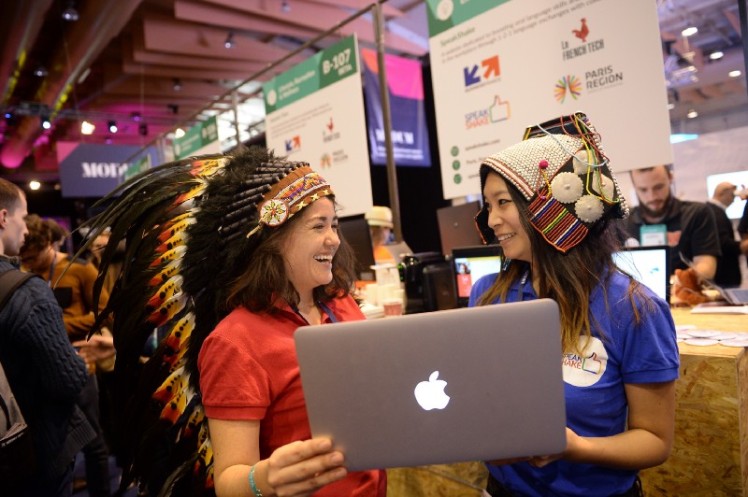 International company? How to ⬆️ collaboration between offices abroad as well as boosting your employees' skill set?@speakshake 🙌 #WebSummit pic.twitter.com/8IVzypFLTp

We are at #WebSummit in Lisbon! Follow us on @instagram to see what we get up to! #SpeakShake pic.twitter.com/OvdGX3kNxK

A recent French article on SpeakShake published online by our incubator, Telecom Paris.

November 2017 – SpeakShake has been selected to form the Business France delegation at the 4th edition of the WebSummit taking place in Lisbon from November 6 to 9, 2017 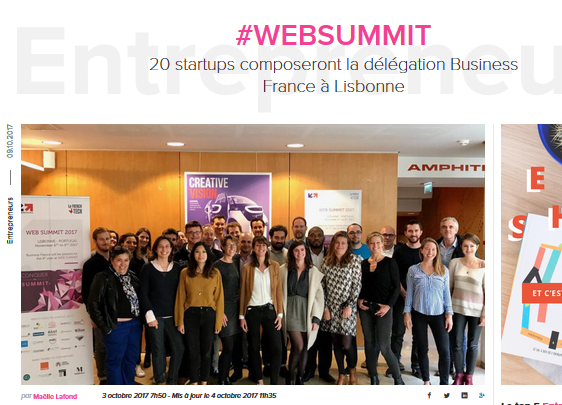 October, 19 2017 –  SpeakShake won CCI Paris Ile de France prize at the start-up day of our partner ADP, and will start a 6-month mentoring with them 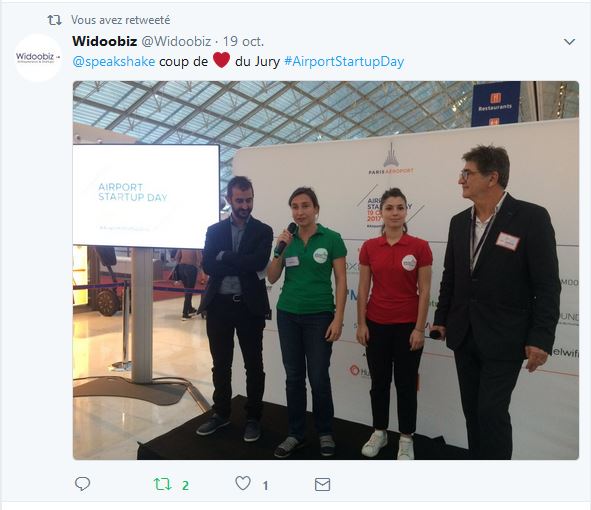 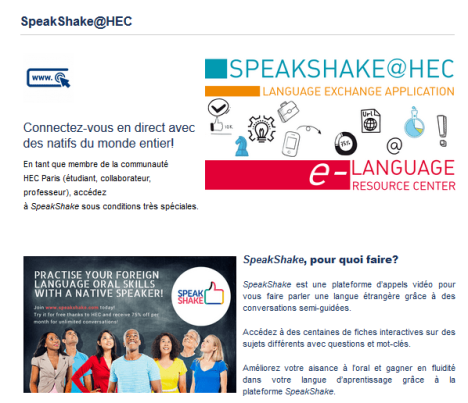 October 2017 – Partner of the ADP group, SpeakShake has been selected among the innovative startups and participated in the Startup Day on October 19, 2017, vote for us!

April 2017 – Institut Français is our official partner and has recommended SpeakShake for practising oral skills in a foreign language. 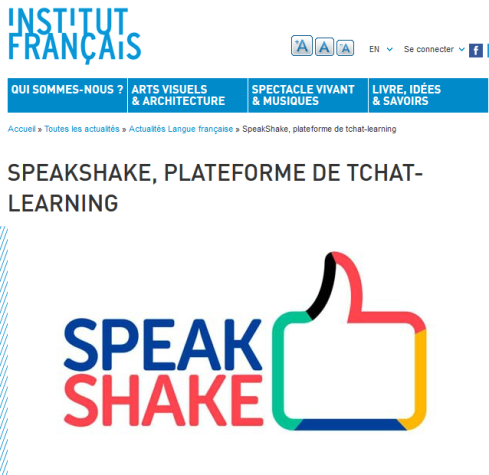 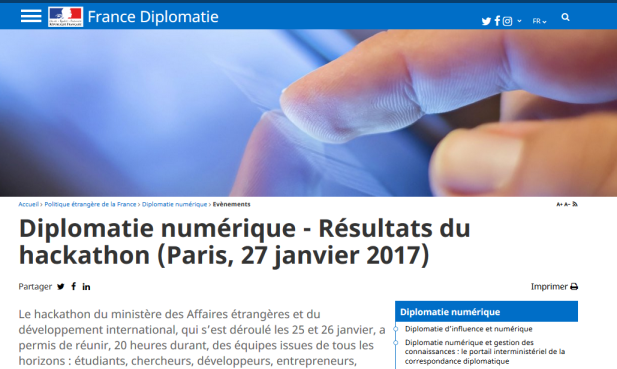 We are incubated at Télécom Paristech, 9 rue Dareau 75014 Paris

The Cité Universitaire and us! 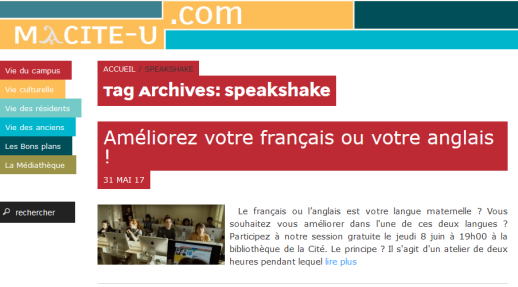 They’re talking about us!